May is Maternal Mental Health awareness month. At HappyWithBaby.com we know it isn't always easy being a parent. But with support, encouragement, and education things can be easier. We are so exciting to be collaborating with some excellent clinicians, sharing some amazing articles, that offer just those things. 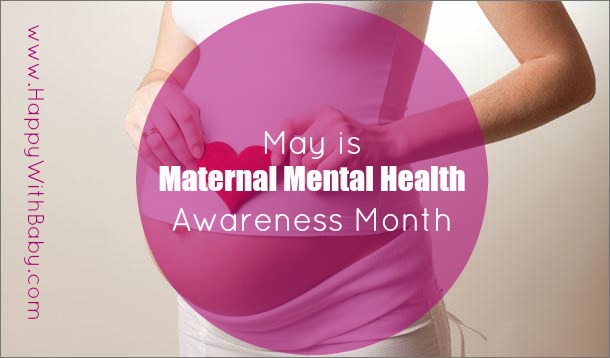 "I love the idea of knowledge as power. When I was pregnant with my now 7-month-old son, I thrived on learning the functions of my symptoms. Nausea meant the hormones sustaining my pregnancy were strong and present. Ligament pain and achey feet told me my body was adapting to carrying new and different weight. Sore hips and wobbly knees said the hormone relaxin was doing its job to open my body up in preparation for labor. Somehow, even though these experiences were unpleasant, it wasn't hard to appreciate them as living proof that things were exactly as they should be. While far more intense (understatement alert), the same framework was a huge support through labor and delivery.

So imagine how disempowering it felt to have a brand new baby at home while going through things that were as elusive as they were intense. Like so many women, I had prepared to have my baby, but I didn't feel prepared to have a baby. Side-by-side with the experience of falling in love with this plump little boy was the reality of long crying jags, nursing marathons, and an overwhelming sense that I was doing everything wrong -- that perhaps someone else would be more competent to be in charge, because my intuition seemed to have snuck off to take that nap that the rest of me was stubbornly fighting.

But alas, I live not only to tell, but to reflect on some important pieces of information I wish I had been armed with before the little dude joined the team. I want every new mama (particularly those of the I-can-do-it-all-myself-ilk) to not only be able to say “It's not me, it's one of these experiences,” but also to be able to help identify them with other moms. Connection is power too (second understatement in two minutes). Let's get started.

1) Growth Spurts/Cluster feeding OR “Good luck getting off the couch because every time you stop nursing the baby loses his ever loving mind until you put him back on.”

Also called “bunch feeding,” this phenomenon -- when baby wants to nurse more than what is typical for him, whether that's every hour or every five minutes -- usually happens somewhere toward week two, then every two to three months in the first year. It may happen more in the evening, when milk supply is naturally lower. For me, it was an all day affair.

It's easy to feel stuck during these times, both literally and figuratively, when you're the only one equipped to do this marathon feeding. Some women describe these phases as feeling overwhelming, irritating, and tiring.  With the intensity it brings, it can be easy to forget to nourish your own body. I know even when I had the foresight to set up a little station for myself with water, snacks, phone, and remote, I  would get so sidetracked by the baby's cries that I would plop down to nurse inevitably just out of reach of my goods. It was a sad sight to see, me staring longingly at that bowl of pirate's booty, so close, yet so far away.

But here's the thing. Because breastfeeding is a supply and demand business, cluster feeding is thought, by lactation experts, to serve as a supply-booster. This is not to say your supply is low! Many women think this is the case, and that can trigger stress, but it's often not the reality. Your baby is likely going through or is on the verge of  a growth spurt and needs more calories to meet his growing needs.

He needs more. You produce more. It's an effective, albeit crazy-making little system.

Hard as it may be, try to remember the temporary nature of these megafeasts and the amazing function they serve. Getting some good recommendations for shows to binge-watch on Netflix probably won't hurt either. As there are pauses from feeding, let someone else be in charge, and grab a change of scenery, preferably one involving fresh air.

2) Wonder Weeks OR “Who stole my relatively even-tempered babe and replaced him with this screaming monster.”

Just as physical growth spurts lead to some fussiness and an increase in appetite, cognitive growth spurts -- when babies are becoming oriented to the world in a new way, learning new skills, and making “mental leaps” -- they have a really hard time of it. This often manifests as an increase in crying and clinging, suddenly and perhaps uncharacteristically. I picture it being for babes a bit like when you pop those glasses on to watch a 3D movie and what was once flat is suddenly protruding within an inch of your nose. But you're under two feet tall, were content to hang in a warm, dark, insulated room for nine months, and did not ask to see this movie.

The first of these leaps happens around week five, but not knowing this at the time, I just thought I suddenly had a baby who permanently wouldn't fall asleep and who would cry and require someone to walk him around for the rest of his life. My arms hurt, my back spasmed and I ached for sleep. I plodded through our days barely keeping it together, and when I exerted myself beyond our norm -- specifically to celebrate my dad's 70th birthday, I fell apart.

Midway through dinner, one that my brother had flown across the country to attend as a surprise, the tears spilled over.  I excused myself and made it an early evening. (In a fun twist of events, the baby slept peacefully through the entire dinner).

The whole leap lasted all of a few days, but it felt like an eternity, one in which I re-imagined my whole life being harder. As the clouds parted, we were greeted by baby's first social smile (There is always a prize at the end of the leap, be it a new skill or a higher level of alertness)

These phases continue for the first couple years and are so predictable that you can actually download an app and plug in your little one's due date to generate a schedule of when these so-called leaps are set to happen. This can bring solace in and of itself. Baby screaming out of nowhere? Check the app, learn what baby's working on, and when you might anticipate the more peaceful time in the near future.

3) Supersized Self-Doubt OR “I Thought I Was A Somewhat Together Person Why Can't I Do All This.

The above shared experiences are specific to baby's growth and the impact it can have when you don't know what's happening. But let's talk about the sum total of these first days of new mama business. Let's focus solely on you.

Your hormones are still fluctuating, you're healing from the process of giving birth, and sleep feels like a thing of the past. The sound of your baby's cry feels like it is piercing your soul. And yet you may not have showered, eaten, run a comb through your hair. Your house is a mess and you may be snapping at the people around you. You have so many needs to be met, yet you feel like you should be able to do it all – and, dare I say, with a smile on your face.

I call an extra bulls*&% on this particular should and let me explain why.

During one of my exhausted self-doubty moments, I called a dear family friend who also happens to be a retired labor and delivery nurse. She had availed herself to me countless times, and the I-got-this part of me had yet to reach out. This was a moment of surrender.

“Hi Shana,” she answered the phone. I squeaked out a hello. “How are you doing”? I somehow managed a short description of a difficult few days before the weeping started. “Would you like me to just talk”? She asked. I sniffed out a small yes.

She described her own experience as a new mom, decades ago, walking in circles in her apartment with her inconsolable baby. She shared some of her education about baby's underdeveloped nervous systems that simply grow with time (So here's a bonus, it's not you, it's baby's underdeveloped nervous system). She mirrored the difficulty of this first phase, which was helpful enough, but then her voice got firm and she said this:

“You know, back in the day, young women gave birth and their elders took care of the baby. That was the norm.”

I suddenly remembered studying various present-day cultures all around the world in which there are people who care for the mom and/or her new baby for the several weeks postpartum, allowing mom to heal and bond with the baby without having to tend to anything else. To not have this is a modern American cultural norm (one that hangs alongside our dismal maternity leave policies), not personal deficit!

Think of the sayings, “No man is an island,” and “It takes a village.” Well, I say “No woman is a village,” and we shouldn't expect ourselves to be. So perhaps the function of the overwhelm is to remind us to let our people in to help out.

If you are having trouble accessing your network or need to expand it further, there are people out there who can help! Postpartum Support International is a great starting point that can lead you to local resources: http://www.postpartum.net/

Remember, when things feel tough, it's not you, it's the enormous experience of sustaining a new life. " 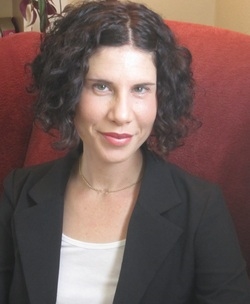 Shana Averbach is a San Francisco-based therapist in private practice who is passionate about fostering connection and compassion among women and helping people be kinder to themselves in general. Supplementing her lived experience of being a new mom, and habit of talking emotional health mom shop with every mama she knows, she is completing her certificate in Maternal Mental Health through Postpartum Support International. You can find her at www.shanaaverbach.com or www.facebook.com/ShanaAverbachMSCounseling

There are no comments yet. Be the first one to leave a comment!